On a chilly Thursday morning as I explored the Big Beech trail with the Education Team, I spotted a ghost in the woods. This ghostly white flower is commonly known as the Ghost Pipe or Indian Pipe. Scientifically named Monotropa uniflora, this all-white flower only pops up in old, established forests in shady spots after a period of rain. 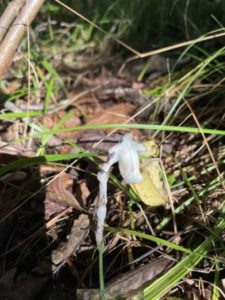 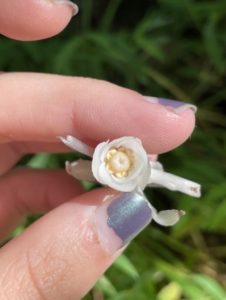 The milky white appearance of the flower is stark against the browns and greens on the forest floor. You may be wondering how this flower grows if it has no green chlorophyll to photosynthesize. Interestingly, the Ghost Pipe gathers its strength to grow from energy beneath the soil. This flower is considered a parasite of the Russulaceae family of fungi, whose mycelium (the underground part of the fungi) act as hosts to the Ghost Pipe’s roots. These mycelia connect to nearby tree roots, giving the plant access to the tree’s photosynthetic products. This type of mutualistic relationship between a plant and fungi is known as mycoheterotrophy.

The Ghost Pipe lives most of its life as an underground root, getting food through its fungal neighbors. Once the weather becomes warm and there is a good soaking rain after a dry spell, the flower decides to burst through the soil and offer its flower and pollen to nearby pollinators.

While these special flowers are not rare, catching one in bloom takes good timing. We recommend a summer hike on a heavily wooded trail two to three days after a large rain event. Good trails to search for Ghost Pipe flowers include the Big Beech trail in Pope Lick Park or the Hickory, Chinkapin, Paw Paw, or Wild Hyacinth trails in Turkey Run Park.