I have been an avid hiker and naturalist all of my adult life and have had some amazing wildlife encounters over the years. I have seen black bear in Rocky Mountain National Park, wolves in Yellowstone, porcupine and humpback whales in Acadia, and even bald eagles right here in The Parklands! However, none of those wildlife experiences were as special as my most recent one in….Seymour, IN.

I found myself in Seymour with my Grandfather John Mann who is an avid birder. We were there to see migrating Sandhill Cranes as the farm fields surrounding Seymour are a popular rest stop for these majestic birds. And boy did we see Sandhill Cranes (at least 200)! 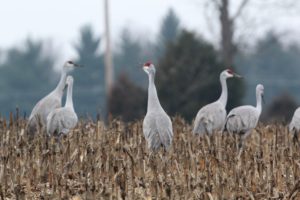 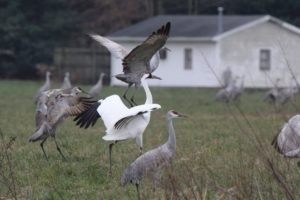 The Whooping Crane that we saw was one of only 85 eastern migratory cranes left in the world. These cranes spend the summer in Wisconsin and Michigan and then migrate to Florida for the winter months making stops in between to rest and refuel.  In the photos we could clearly see the green, white, and red colored leg bands on each of the cranes legs. The distinct pattern of colors on each leg identifies the individual bird, and each band is outfitted with a radio tracker. By using this distinct color combination, we were able to identify this individual bird as #14-12 nicknamed Lily. Lily was born in captivity in 2012 at a wildlife refuge in Wisconsin. After spending many weeks getting used to wetland habitat and other cranes (including Sandhills), Lily was released into the wild on October 29, 2012, and has spent the last eight years making the annual migration with a group of Sandhill cranes. Six other cranes were raised in Lily’s cohort, but only two of those birds remain alive—making our sighting even more special. 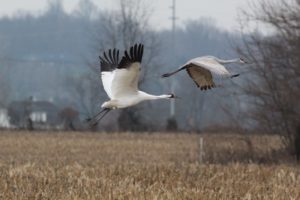 In the mid-1800’s it is estimated that there were between 1,500 and 2,000 Whooping Cranes in the wild. By the 1940’s this number had plummeted to 21 birds. The species loss can be chalked up to the development and draining of wetland areas throughout the United States as well as hunting. Wetlands are crucial habitat for Whooping Crane breeding and migratory stopover, so the loss of these wetlands decimated crane populations. Conservation efforts have focused on captive breeding programs, reintroduction, and restoration of wetland habitat. The fact that the total population of Whooping Cranes is now over 800 birds is a testament to these efforts; however, there is a long way to go to restore their traditional numbers. 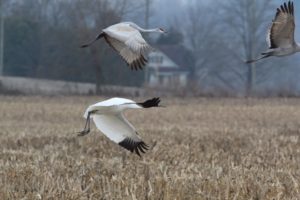 Here in The Parklands, we remain dedicated to restoring historic wetland habitat—not just for cranes, but for all the wildlife, plants, and people that depend on these critical ecosystems. To see a wetland rehabilitation project in action, head to the Humana Grand Allee Wetlands in Beckley Creek Park. And keep your eyes peeled, you never know what you might see! 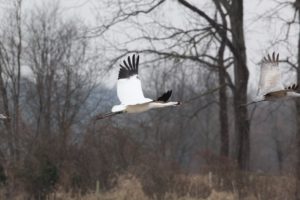