This time of year, especially with warm temperatures and decent rainfall, my coworkers and I can frequently be found in some corner of the Moss Gibbs Woodland Garden weeding. Visitors, especially those unfamiliar with the garden, see us pulling plants out of a wild-looking area and often comment about us “weeding the woods.” When it comes to the Woodland Garden, which exists somewhere between a conventional garden and a managed forest, they’re not entirely wrong. So why are we weeding the woods, and how do we go about it?

Why do we weed?

On a functional level, we weed partly to give the thousands of plants we have inserted into the existing woods a chance to survive and, hopefully, thrive. Even some of our native plants can be aggressive, not to mention the list of invasive exotic species present in the garden. Reducing the competition by weeds for light, soil and water allows our desirable plants to become established more quickly.

More attention, however, goes into weeding for aesthetic reasons. The Woodland Garden is primarily an experience of the beauty of the land, water, flora, and fauna of the eastern deciduous North American forest. Each space within the garden has a unique design with plants that call for different approaches to weeding. Near entrances and certain other areas, visitors encounter landscapes more like the formal gardens with which they are more familiar. Plants are clustered in groups or masses, the number of species/varieties is limited, and humans seem to be in control. Weeding these areas is relatively simple, but tolerance for weeds is low. Anything that wasn’t intentionally planted probably needs to be removed, and mulch is used to suppress anything too spontaneous. 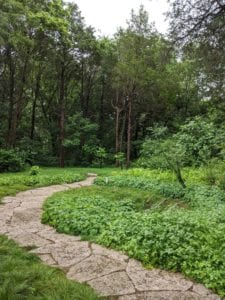 Sinkhole spiral entering the garden from the west, June 2020.
Plants are in distinct masses and weeds are easy to identify.

Further into the garden, things get a little more complicated. The ethos of a woodland garden is to start with what was here, and while we introduced thousands of plants, thousands more were already here for generations. It isn’t feasible or desirable to remove all of the existing plants, but there are definitely plants present that interfere with what we want to see happen in the landscape. Judgment calls have to be made on what is or isn’t a desirable plant in a particular place. While this makes weeding these areas seem more complicated, the underlying motivation is the same. We weed in the Woodland Garden to reveal the design intent for the space, or, put another way, to create the desired experience for the visitor.

How do we decide what is a weed and what isn’t?

In areas that include both planted and existing plants, it can be challenging to define what is a weed. Following our goal of weeding to reveal or create a particular experience, we can ask questions that narrow it down.

●      What plants are invasive or threaten to out-compete/out-reproduce the plants we want to see here?

●      What plants are blocking desired views or covering up intended plantings?

●      Where do we need to create a neat edge to show humans care for this landscape?

These questions are revisited often. We can come to the conclusion that a plant is good in some places and bad in others—even just a few feet away! 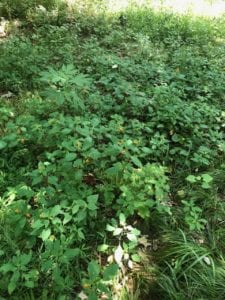 BEFORE: Ground layer beneath the Venerable Oak –
Jewelweed and others cover grasses and ferns. 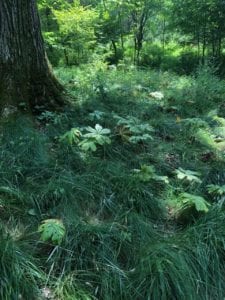 How do we get started?

After looking at a section of the garden and deciding what might need to be removed during weeding, we have some approaches we find helpful as we work.

●      Subtraction: Sometimes removing just one or two species can completely change the look of a garden. This is helpful when working with new volunteers—they don’t have to know every plant in the area, just the one we need to take out. Another way to think about this is weeding in layers.

●      Population-level weeding: Instead of attempting to remove every individual plant, we’ll remove as many as we can to reduce the population until we get the effect we want.

●      Work quickly: Hand in hand with thinking on a population level, sometimes it is counterproductive to try to slowly and methodically fine-tune each area. In wilder areas, we will move quickly, pulling weeds by hand in big bunches. I joke that this is like harvesting some kind of worthless crop.

●      Zoom out: It’s important when weeding quickly to pause and step back periodically. We look at the big picture and think about the desired effect.

●      Timing is everything: We often prioritize weeding to prevent re-seeding. If something that reproduces by seed in large quantities is starting to bloom, it’s the first to go. Currently that includes plants like Queen Anne’s lace (Daucus carota) and fleabane (Erigeron spp.). Sometimes a plant works at a certain time in the season, but gets too large and overshadows others. Jewelweed (Impatiens capensis) can be an example. Weeds that have a large aboveground portion but small root structure, like stiltgrass (Microstegium vimineum), are much easier to remove when they are large enough to grasp and pull by hand.

●      Chop and drop: Rather than pulling or digging, sometimes we chop down a weed with shears in pieces. This delays or prevents seeding, and doing it repeatedly can kill the plant. This quickly creates space for neighboring plants and avoids disturbing the soil.

●      Send to background: The Woodland Garden has been called the garden of edges, and some plants that are too large or aggressive in the foreground are good fillers in the background. An example is white snakeroot (Ageratina altissima) which in some places we rip out near the path but allow to proliferate 15 feet back. This can simply involve pulling it up and throwing it back into the woods.

●      Know when to stop: There can be an impressive density of plants in our woodlands. If too much is removed along the forest floor in one place, it can look barren in the context of neighboring areas. It’s also a good reminder to think about what will take the place of what we take out. Often the soil disturbance is an opportunity for new weeds to come in.

●      Challenge assumptions: Can ground ivy (Glechoma hederacea) or stiltgrass be groundcovers where nothing else can? Can mullein (Verbascum thapsus) provide structure and unique texture? If wingstem (Verbesina alternifolia) and ironweed (Vernonia gigantea) are chopped down early in the season, can they be treated like compact perennials to provide late-season color? Are most of the weeds in a garden bed actually just the plants we planted reseeding? It can be helpful to think critically about assumptions we make about a plant’s usefulness or belonging in a garden.

●      Give it time: Sometimes when ‘planting into the wild’ it feels like the weeds are winning and what was planted is getting swallowed up. Just one year later, the plants may be thriving, holding their own and the weeds beginning to be a green backdrop that just needs occasional management. 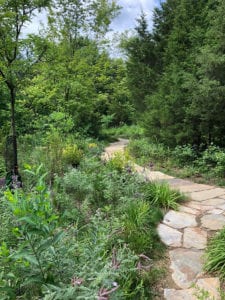 Glade Garden in early summer, 2020. One year of growth and selective weeding and chopping
has given perennials and shrubs such as lead plant (Amorpha canescens) room to show off. 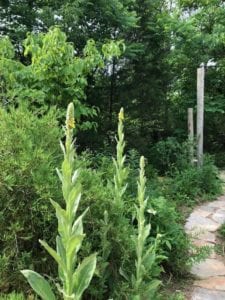 Glade Garden in early summer, 2020. Three mullein (Verbascum thapsus) plants made an attractive
formation, and so we allowed them to live there until they flowered, then cut them down.

Finally, as former Parklands Horticulture Director Tom Smarr might say, green is good! Existing and volunteer plants are big contributors to the lush, green environment that makes the Woodland Garden such an enjoyable place. While managing them is a critical piece of maintaining the garden, it wouldn’t be the same without them.