Our Natural Areas Team at The Parklands is always keeping a watchful eye out for any invasive species. It’s our #1 goal to keep the parks you love healthy and happy! Based on how heavy the presence of the invasive species is and priorities, we develop management strategies to combat them as they occur each season. Invasive species in the Parklands is comprised of many aggressive plants including bush honeysuckle, johnsongrass and teasel among others. However, we also monitor for invasive insects and animals that can pose a threat to ecosystems in the park. Recently, we developed a management plan for the Spongy Moth (Lymantria dispar) formerly known as the gypsy moth.

This insect has posed a threat to hardwood trees since its outbreak in the United States in the late 1800s. Although they have not been found in Kentucky,  they are present in almost all of our surrounding states, including Indiana, Ohio, Virginia, and West Virginia. With this invasive moth so close to our doorstep, monitoring for new outbreaks is key for managing the pest. Catching a potential outbreak as early as possible and preventing its spread is the best management practice we currently have.

Spongey moths have several stages of life just like other moths and can be easily identified through all of these stages. These include the egg sac stage, larval stage, and adult stage. The egg sacs, which generally hatch between April and May are small, light brown masses that adhere to hard objects. While these sacs typically stick to host plants but have often been found attached to vehicles and firewood. This poses an issue because they can be transported over large distances in a short amount of time. Once the eggs hatch, they enter the larval stage. During this stage, the spongy moth will look like a dark colored caterpillar covered in fine hairs. These caterpillars have six red and three blue dots that occur along their back, which is a huge key for helping our team identify them. The larvae travel using silk it produces to move through wind currents.  Leaving the larval stage, the spongy moth enters the adult stage. During this stage, the male is a light brown colored moth that emerges in June and persists until late summer. Males are about an inch wide and have brown wings with dark brown zigzag lines. The females, although not able to fly, have cream-colored wings with brown zigzag lines and are slightly larger. During their 2-week life span as an adult, the spongy moth uses this time to reproduce and spread potentially causing further damage to our ecosystem.

What is the threat?

The insect is a threat to hardwood trees due to the defoliation it can cause during the larval stage. When a tree becomes infested, they have been known to lose all of their leaves early in the growing season. This is a serious issue because the caterpillars can feed on hundreds of different species of plants. Although their preferred host plant is oak, they also feed on species of apple, willow, pine and spruce. Trees that defoliate, or lose all their leaves, early in the summer become stressed, which leaves them prone to several other problems. If they do not recover from this stress, they can eventually succumb to major issues, such as crown dieback (in which the limbs around the crown of the tree begin to die from the outer tip in), and eventually die. Spongy moth Larvae are voracious eaters. A single larvae can eat through several feet of a tree canopy as it grows.

The Parklands Natural Areas team has joined a monitoring program developed by the UK Cooperative Extension Office and the entomology department at the University of Kentucky.  This program monitors for Spongy Moth along the portion of Floyds Fork that runs through the Parklands. Traps have been set all along the fork to catch the moths once they emerge.  The Louisville Loop is a 19 mile paved biking and walking path that intersects Floyds Fork in many locations and allows Parklands staff excellent access to each trap. These traps, known as delta traps, contain a pheromone from the female moth that attracts males. When the Spongy Moth enters the trap, they are caught in an adhesive.

The Natural Areas team currently monitors 10 traps throughout the season for signs of spongy moths. Data is recorded  regularly and immediately sent to the University database. The goal at The Parklands is to detect the presence of Spongy Moths coming in or out of the east portion of Jefferson County.  We hope to help bring attention to this serious invasive pest and alert others in the state of its spread in Kentucky.

How you can help?

Learning to identify the Spongy Moth at all stages of life is a great way to maintain a watchful eye for this invasive pest. Should you discover an insect that you believe to be a Spongy Moth, you should report it to your local cooperative extension office right away.

Getting a trap is relatively easy and something you can build and set in your own yard. Schools can use these traps for educational purposes and they are fun to keep track of! The University of Kentucky has an application used to track for signs of infestation. It is easy to contact your local extension office and get involved with monitoring for this destructive pest.

The Parklands of Floyds Fork has yet to find the presence of Spongy Moth in any of the almost 4,000 acres, but we continue to keep an eye out for this invasive pest each year. 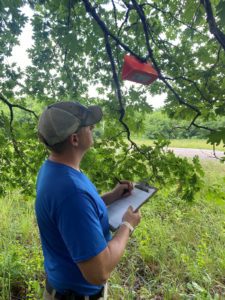