Recently, evidence of one of nature’s most industrious mammals has been seen along Floyds Fork and its tributaries. This mammal, the largest rodent in North America, is an herbivore and is known for its engineering skills. Yup, you guessed it, the beaver! Tree stumps displaying textbook beaver chewing skills have been found near Creekside Center in Beckley Creek Park (near PNC Achievement Center), off Boone Bottoms Trail in Turkey Run Park, and off Riparian Ramble Trail in Broad Run Park.

Beaver are called nature’s engineers—and for good reason! The American Beaver, or castor Canadensis, is one of the only creatures besides humans that alter their physical landscape. While humans build roads, bridges, and buildings, beaver build dams on creeks using cut logs, branches and mud that impede streamflow to flood the surrounding landscape. The beaver are literally creating habitat for themselves. Beaver are clumsy critters on land but are graceful swimmers. By damming a stream and flooding a riparian forest forming a pond, beaver are able to move better to gather food and are more able to escape predators like coyotes and fox.

These rodents are fantastically adapted for engineering and swimming. The beaver’s trademark front teeth glow a pumpkin orange and, no, it is not because they don’t brush them! The orange on their front teeth is iron that has replaced calcium making their teeth strong and capable of felling trees of 6”-36” in diameter. Cutting down trees and floating them downstream enables beavers to construct dams and the lodges in which they live. Lodges often house multiple families of monogamous beaver and their kits.

Lodges are only accessible through underwater entrances giving them another layer of defense against predators. They also use their flat tail to slap the surface of the water making a loud clapping noise warning other beaver of potential danger in the area. Thick, oily fur allows beaver to stay warm and dry even in the winter months. Webbed back feet help beavers swim at a clip of almost five miles per hour, and clear, membrane eyelids function as goggles. Since beavers are mammals, they breathe oxygen from the air but can hold their breath for up to 15 minutes. Small skin flaps in their nose close when the beaver dives keeping water out and oxygen in.

To date, we have not found any beaver dams in The Parklands, most likely due to the flood regime of Floyds Fork. Flooding occurs too often and is too violent for damns to survive on the fork. Most likely, the beaver have been harvesting trees for food. Along with leaves and aquatic vegetation, beaver eat the cambium layer of trees. The cambium layer is the thin, living layer of trees just beneath the bark that transports water and nutrients. Beaver prefer softwood species like cottonwood and willow but cut down many different species.

So the next time you are walking or riding near or paddling on Floyds Fork keep an eye out for cut trees or possibly even beaver themselves! Check out these photos from Parklands social media followers who have seen evidence of beaver handiwork throughout the parks: 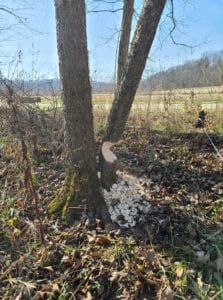 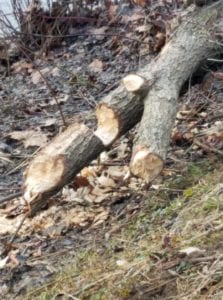 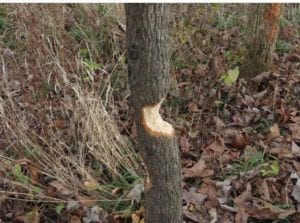 As Director of Education, Curtis Carman oversees The Parklands Outdoor Classroom, promoting STEAM-based education through engaging, hands-on learning both outdoors and inside the classroom. Each year, his team of Education Specialists, Interpretive Rangers and Camp Counselors guide nearly 20,000 participants of all ages through school field trips, camps, Parklands Explorer, Junior Explorer and Wednesday Wonders. Prior to his promotion to Education Director in May of 2018, Curtis first joined The Parklands team as an Interpretive Ranger and led the department as Education Coordinator for three years. A native of Louisville and a graduate of Ballard High School, Curtis returned to his hometown after having worked as an environmental educator in Maine and Colorado at Acadia and Rocky Mountain National Parks. Curtis also served as Membership Manager at the Rocky Mountain Conservancy. Curtis enjoys hiking, biking, camping and kayaking.