Recently, while checking out an area for a school program in Beckley Creek Park, the education staff came across some very unusual animal signs. We found blood and a lot of it. While we know that violence is a part of our park ecosystem, it isn’t very often that we get such an intimate look at the events of some of our animals’ lives. While a bit upsetting, it was also very exciting to piece together their story.

I’m going to give you the facts and my interpretation of them but keep in my mind that we will never know the complete story and there may be a better interpretation out there.

Before we came across the blood, while walking through an open field we saw a large buck heading south into the forest. He was one of the biggest Whitetail bucks I’ve seen this year and had a substantial rack on his head. I wasn’t able to photograph this deer as it was only a brief encounter.

We headed into the forest heading away from the buck. We were loosely following the creek when we saw another smaller buck cross the creek ahead of us. This second buck paused and I was able to snap a few pictures as he turned to check us out. He appeared quite fine and had no visible injuries, but he only showed us one side of his body. 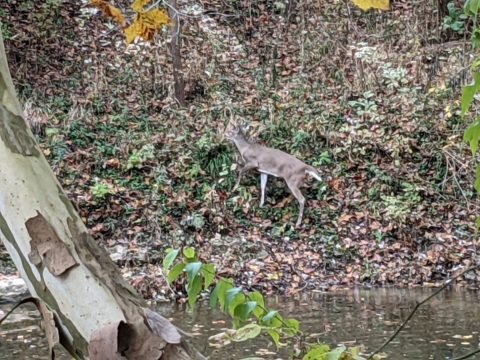 After the deer gracefully picked his way up the bank and out of sight, we discovered the blood. Fresh red blood that had been spilled so recently that it had not oxidized in the slightest. It was not only a spot of blood but a trail of drips and larger splashes. First we followed it to the creek and it seemed to follow along the same path across the creek as the second buck that we just saw. While he didn’t seem injured, it also didn’t seem likely that another animal passed by so recently following that same trail. Crossing the icy cold creek was not a safe option for us especially if it meant cornering a potentially injured deer. 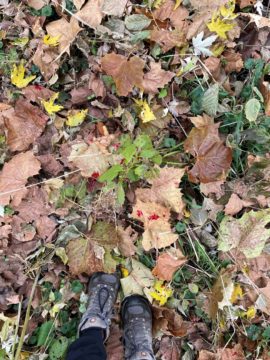 Instead, we opted to follow the blood trail back to where it came from. We followed the drips, occasionally pausing as they were spaced out in some parts as maybe the deer took a leap. In other parts the blood flowed a little more heavily, perhaps as the deer paused in one spot for some time. After about 100 yards, the blood trail took us back out of the forest into the grassy clearing where we first started and where we spotted the first, larger buck that took off in the other direction.

The mowed area was where our blood trail ended and it seemed like the most likely place that this was where the trail began and hence the injury took place. This is where I start to weave our observations with my own knowledge of behavior and seasons together into a story.

We are in the tail end of the deer rut. This is the mating season for Whitetail Deer that lasts 2-3 weeks around the last week of October and the first two weeks of November. During this hormone-fueled time, males will spar with each other to establish territory and mating rights. These sparring matches generally don’t last very long as the two deer butt heads and lock antlers. Typically these matches are over in a few minutes after one deer realizes that he’s well outmatched. Death is rare, but injuries can be fairly common and sometimes serious.

What we probably saw, when we first happened into the grassy clearing, was the victor dashing away after the spar was over having been startled by our presence. The loser picked his trail through the forest and eventually made his escape across the creek which is where we saw him after we entered the forest. I only think of him as the loser in this fight because he ended up with an injury. There is definitely room for other interpretations in which he was the victor even though he was injured or that neither of them were a victor because of our human presence.

While it is unsettling, the bucks were both hardy enough to survive and heal from most injuries sustained in a fight. The injured buck will likely heal and learn to be a better match next year. As we headed back out of the forest, we paused to try and find the trail of blood once more but already the blood trail was obscured from oxidizing into the same brown as the leaves on the ground. We truly stumbled into the trail at just the right moment and even a half hour later the opportunity for a glimpse into these animal’s lives had closed.